In August, of 2017, the mother of the groom called me inquiring about a DJ who travels and can provide music for 250 people at an outdoor wedding in Greenville. Truth be told the wedding was outdoors overlooking Moosehead Lake in Maine. Having not met the couple I began planning with Rebecca for one of the biggest, outdoor, events I have been a part of!

Was at a church just down the street. The chapel was tiny – Cute, per-say. Rebecca had married her husband there 30 years prior & and it was now Mason’s turn to marry Ashley. I offered to provide a ceremony system for the lovely couple but the church was just too small. I tried to setup in numerous places and there wasn’t space to be had. Of course, they had to fit 200 guests into this little place! 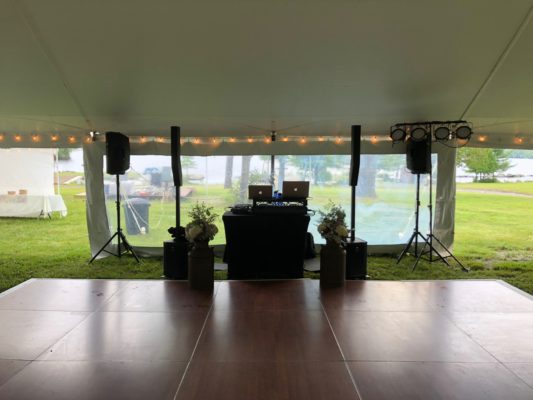 Was perfect and had, narrowly, missed the intense rain we had earlier in the day. We had to get creative to provide sound to such a large group… Having plenty of equipment was necessary to make sure we were providing the best service we could. The guests enjoyed a variety of music; however, we stuck to mostly 90’s through the recent 2010’s. Drakes “In My Feelings” was the most requested song of the evening. The guests were having a wonderful night and we ended up staying an extra hour to make sure the party was the best it could be!

There are some songs that should never be played at a wedding. I could go on for a long time…But, this Moosehead Lake wedding was an exception to my rule. The bride and her bridesmaids were doing the Hokey Pokey out on the dance floor… and, I took the opportunity to give them what they wanted!

My name is Chris Bouchard the owner of Bouchard Entertainment. I started as a professional wedding DJ in 2014 when I founded Bouchard Sound Services. I had a couple of really good wedding seasons and felt the name, I represented, did not adequately describe the service provided. In September of 2017 I began the process of rebranding Bouchard Sound Services and by the end of October 2017 Bouchard Entertainment came to life.